Hello! This programme ended in 2013, but we've kept the website online as an archive. It won't be updated with any new content.

Below are some headlines. You can also download the full project report here

– 48 beneficiaries (against a target of 45) chosen from 143 applications

– 84% of participants felt they had a stronger understanding of how to get their work presented at festivals, distributed and exhibited

The FilmWorks 2012 programme got off to a flying with a packed industry event live from the 18th Encounters Short Film & Animation Festival in Bristol, which saw participants from Sheffield and Nottingham join in live from the comfort of their own “hub”. Julie Lockhart quizzed Award-winning film director Peter Lord (Aardman co-founder) about how his ideas shape up. At the other end of the spectrum, Bristol-based producer Alison Sterling discussed the development of Flying Blind, Polish director’s Katarzyna Klimkiewicz’s debut low-budget feature following their encounter at the festival in 2008.

The programme then run until mid-December 2012 at one of three regional venue hubs: Bristol’s Watershed, Sheffield’s ShowroomWorkstation and Nottingham’s Broadway. at the following regional creative hubs; each joining forces with an experienced producer:

See details of each session below and recordings of events here. 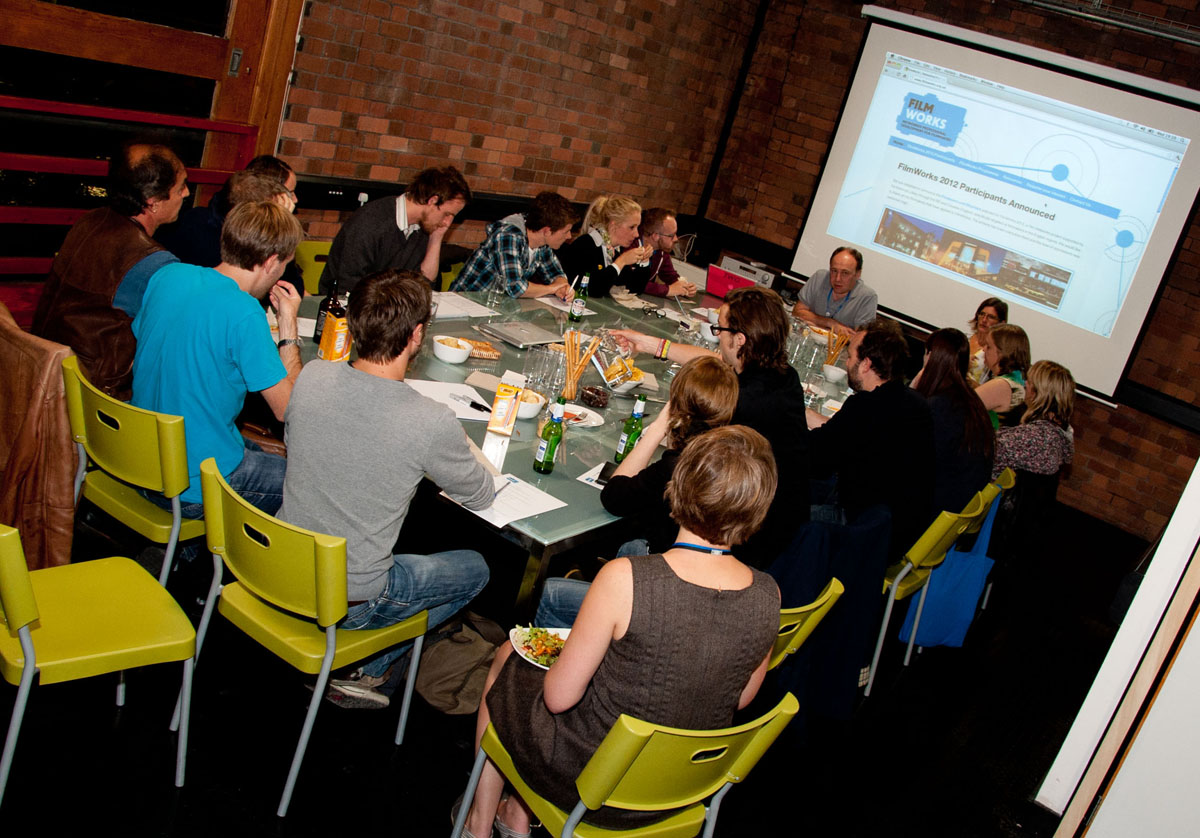 FilmWorks Launch: It Begins With An Idea
Wed 19 Sept 17:00 – 18.30 Live from Encounters Short Film & Animation Festival at Watershed.
Where do ideas come from and just how do you know if it is worth pursuing? How does an idea develop into a “creative package” that can then be pitched? And at what point does the audience begin to matter? Guest practitioners unpicked these questions in a session chaired by Encounters Creative Director Mark Cosgrove. Speakers: Peter Lord – Co-Owner and Creative Director, Aardman Animations, Katarzyna Klimkiewicz – Director, Flying Blind (iFeature), Julie Lockhart – Producer, Aardman Animations, Alison Sterling – Producer,  Flying Blind (iFeature.) Read Mark Cosgrove’s HuffPost piece on Encounters Short Film and Animation Festival.

FilmWorks Session 2 – Creating a sellable film package
Wed 3 Oct 17:00 – 18:30 Live from Broadway, Nottingham.
Chris Hainsworth, Managing Director of AV Pictures, a sales agency championing break-through talent, and Embargo Films’ Christopher Simon, Producer of the UK box office No.1 The Sweeney joined FilmWorks’ Al Clark to discuss and answer your questions on how budgeting your film at the right level, attaching above the line talent and securing a sales agent can provide the tools to help finance your project.  Together they shared their knowledge on what sells in the market, what attracts talent to film projects and how to develop a viable finance plan.

FilmWorks Session 3 – Prepare to be prepared!
Wed 24 Oct 17:00 – 18:30 Live from ShowroomWorkstation, Sheffield
Being able to ‘sell’ at all stages in the filmmaking process will strengthen your chances of commercial success with the finished film. Explore techniques and approaches to selling yourself, your creative ideas and your film’s potential niche in the commercial marketplace – do it early and be prepared to pitch on demand! The panel’s expertise lied in understanding the nature of social networking, knowledge of the funding landscape and finding new approaches to structuring finance. The session helped participants step back and see the potential impact of every element of the production process on the end results – critical success, audience reach and financial return. Chaired by Colin Pons, Producer, Studio of The North / Fearfactory with guest speakers including Caroline Cooper Charles, CEO + Producer at Universal Spirits and Warp Films, Talent Development Executive Creative England, Tom Kingsley, Writer and Director, Black Pond, Will Sharpe, Writer and Director, Black Pond and Charlie Philips, Marketplace Director, Sheffield Doc/Fest.

FilmWorks Session 5 – Getting your project to market, Getting your film seen.
Wed 21 Nov 17:00 – 18:30  Live From Watershed, Bristol
This panel discussion explored two aspects of getting your project/film financed and out there. First, we looked at the role of finance markets, specifically the London Production Finance Market and how projects can engage with and get the most out of such markets with organiser Angus Finney; Angus has extensive experience in the film industry and authored The Egos Have Landed, an indispensible insight into pioneering production company Palace Pictures. Secondly, we heard from two producers, Tristan Goligher, iFeatures executive producer who was behind Andrew Haigh’s critically acclaimed 2011 film Weekend and Kate Spicer ( Mission to Lars ) who with hard work and social media, got her film financed, noticed and screened in cinemas.

FilmWorks Session 6 – Coming Soon to a screen near as many people as possible
Wed 5 Dec 17:00 ­ 18:30 Live from ShowroomWorkstation, Sheffield
We looked at different marketing strategies and getting your film seen, from traditional distribution to cross-platform to self distribution. How do you build a festival strategy? How much can you do yourself with the aid of free marketing tools? Our panel’s expertise lied across the realm of distribution, film festivals, industry networking and exhibition and gave an insight into the pros and cons of different approaches to the market with your finished film. Speakers included: Ed Fletcher ­ Soda Pictures, Will Massa ­ British Council, Helen de Witt ­ – BFI Festivals Producer, Charlie Philips, Marketplace Director, Sheffield Doc/Fest and chair Simon Ward (Independent Cinema Office)

FilmWorks: To Where? Wed 12 Dec – Watershed, Bristol
Wed 12 Dec 13:30 – 17:30
All 48 participants were invited to Watershed for the final event as part of FilmWorks 2012. After completing three months of intensive sessions, this was priceless opportunity  for all participants in the scheme to meet in person and hear from industry leaders such as legendary producer Stephen Woolley (The Crying Game, Interview With The Vampire) and Chris Moll (Head of Talent – Creative England.) This was followed by a ‘mini-market’ / ‘speed networking’ where participants got an opportunity to pitch and discuss their projects with industry professionals in the industry such as:

Read a piece about the final event by David Clensy – This is Bristol, Thursday, December 13, 2012: ‘Aspiring movie-makers given masterclass from Stephen Woolley’

Participation in the scheme offered: